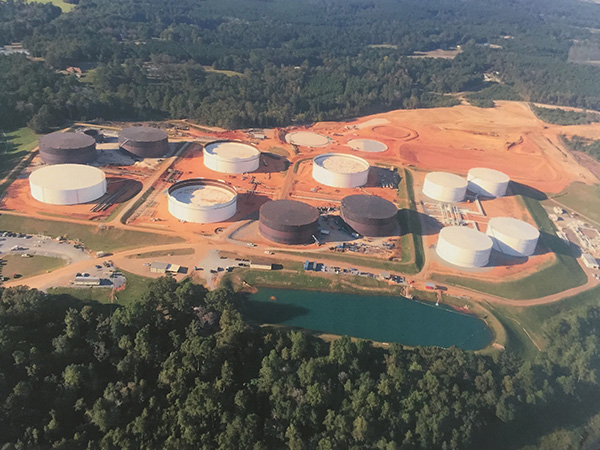 Bulk Storage Facility Expansion – Over the course of several months, GET provided soils explorations and geotechnical engineering studies for multiple expansion projects at the TransMontaigne Bulk Storage Facility located in Collins, Mississippi. The expansion projects covered an area of approximately 80 acres and included 32 ground-level tanks, most having diameters of 180 feet and heights on the order of 60 feet. The soils explorations included approximately 120 soil borings to depths of 15 to 75 feet. The rolling terrain dictated that extensive grading be accomplished on portions of the site. Cut sections were up to 15 feet in elevation with fill areas up to 18 feet in elevation. GET provided recommendations for all ground improvement requirements in order to prepare the site. GET specified design bearing pressures for shallow ring wall tank foundations. GET’s evaluations also included slope stability analyses at fill locations and settlement analyses due to short-term and long-term consolidation of soils as well as for the potential consolidation of deep loose sands due to vibrations or earthquake loading.