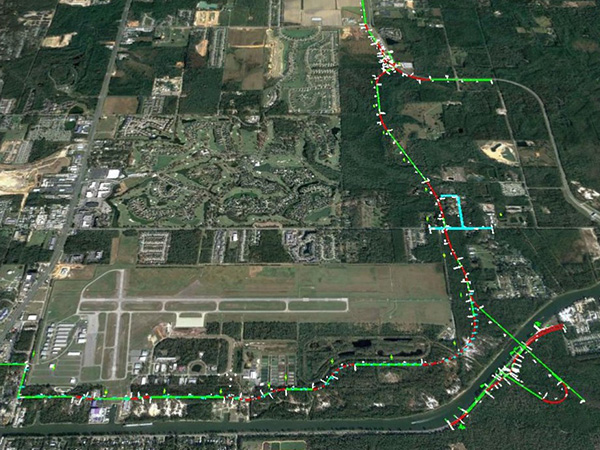 GET provided the soils explorations and geotechnical engineering studies for the Alabama Department of Transportation (ALDOT) for about 2.6 miles of two-lane roadway beginning at SR-180 extending to the Foley Beach Express with plans for future expansion to a 4-lane divided highway. The roadway varies between 40 and 66 feet wide from shoulder to shoulder. The inside paved shoulder is generally 4 feet with the outside paved shoulder varying between 8 feet and 10 feet. Between CR-4 and the Foley Beach Express, there is an 8-foot wide sidewalk/multi-use path beyond the required outside shoulder. The project also includes realigning approximately 4300 feet of SR-180 and realigning approximately 2000 feet of the southbound lanes of the Foley Beach Express.

The project included performing 282 borings for a total of about 10,000 linear feet of soil borings that were performed under a compressed schedule based upon the request of the client. The project required performing over 600 soil classification tests, triaxial shear tests and consolidation tests to evaluate the soil conditions.

Soils explorations and geotechnical recommendations were provided for six bridges to be constructed over the various wetland areas, creeks and roadways. Numerous sizes and types of pre-stressed precast concrete, steel H-pile and spun cast concrete piles were evaluated to provide alternate options for supporting each of the bridge structures.

Soils explorations and geotechnical recommendations were also provided for potential use of mechanically stabilized earth  retaining walls that were planned for this project.