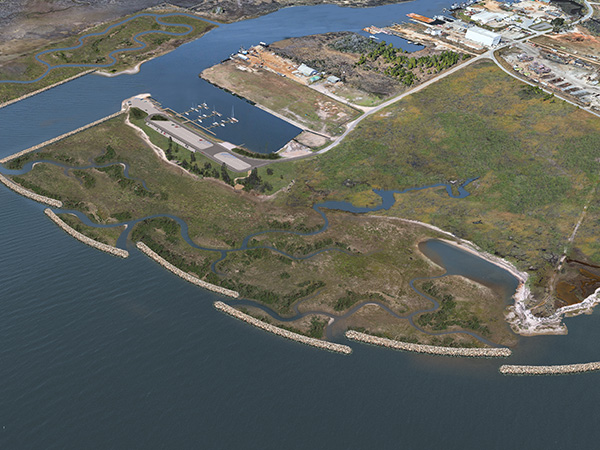 GET provided the soils investigation and geotechnical engineering evaluations for the Lightning Point Living Shoreline project for the Nature Conservancy as part of the Moffatt and Nichol team. The project consists of the reclamation of a portion of shoreline near the Bayou La Batre harbor navigation channel by constructing 1.5 miles of overlapping segmented breakwaters along the shoreline to the west and east of the channel as well as constructing two jetties (700 to 800 feet long) at the mouth of the channel. In order for the barge to transport and place the rip rap for the breakwaters construction, shallow channels had to be dredged to facilitate barge access. Once the breakwaters were installed, hydraulic fill was placed between the breakwaters and existing shoreline.

Geotechnical analyses included ultimate bearing capacity of the near surface soils with respect to supporting breakwaters, long-term settlement projection of the breakwaters, stability of the Bayou La Batre Port navigation channel side slopes after placement of breakwaters and hydraulic fill, side slope stability of the temporary barge access channels during breakwater construction, long-term settlement of the hydraulic fill and insitu foundation soils. The project also included providing infiltration rates of the soils and pavement recommendations for the nearby public boat launch facility