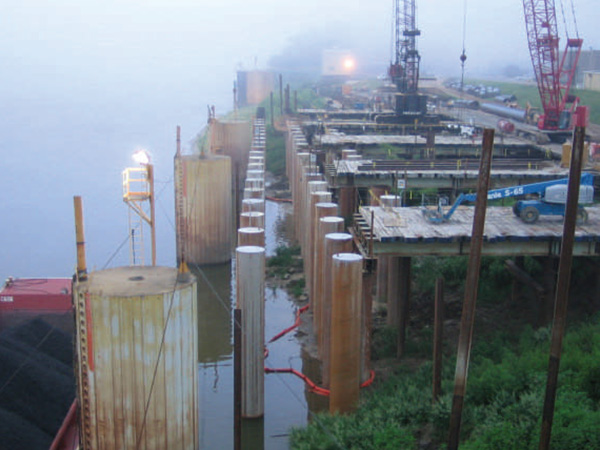 GET performed soils explorations and geotechnical engineering studies to determine the cause of long-term, repeated slope failures of the Tombigbee Riverbank at the Lowman Power Plant in Leroy, Alabama.  The soil explorations included soil borings and rock corings to depths of 150 feet and extensive laboratory shear testing of the clay soils at the site.  In addition, vibrating wire piezometers and inclinometer tubes were installed to study the relationship between pore pressures and subsurface lateral soil movements.  Detailed slope stability analyses were performed using effective and residual shear strengths and varying pore pressure conditions.  It was determined that upper soils were sliding on an inclined limestone surface under low river level and high pore pressure conditions.  Because lowering the level of a deep aquifer to reduce pore pressures would have adversely affected nearby industrial and residential water wells, the riverbank was stabilized by “pinning” the upper soils to the underlying limestone by the installation of approximately 100 cased drilled shafts measuring 54 inches in diameter and averaging 112 feet in length.