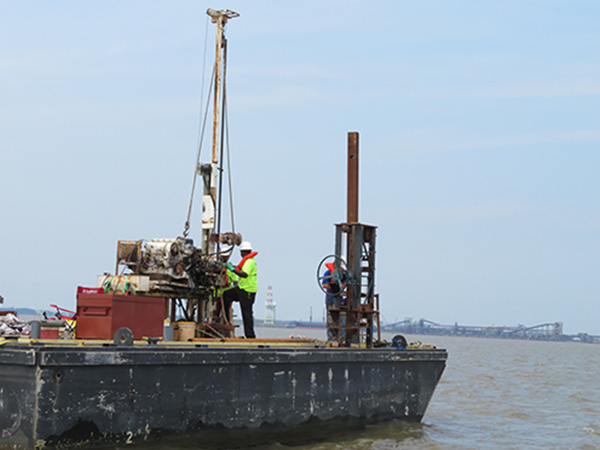 Upper Mobile Bay Beneficial Use Wetland Creation Site (Planning) Project  – GET is providing the soils investigations and geotechnical engineering evaluations for the Beneficial Use Wetland Creation Site in upper Mobile Bay for the Alabama State Port Authority. The project will include the creation of up to 1,200 acres of wetland marsh in the upper region of Mobile Bay, just south of the Mobile Delta. The 1,200 acres includes an initial 100 acres of constructed marsh to be utilized with a long-term development plan for the remaining 1,100 acres.

Geotechnical investigations have included performing marine soil borings in areas of the planned breakwater construction and fill placement areas in Mobile Bay and investigations of borrow source areas within and south of the Mobile River channel.  Onshore borrow sources from dredge spoil basins owned by the US Army Corps of Engineers will be sampled and tested for potential use.

Evaluations will be made with regards to the slope stability of earthen embankments or other material types constructed on the insitu soil and of temporary dredge channel slopes.  Consolidation settlement analyses for the marsh fill area is a combination of the marsh fill material settlement and subgrade settlement. Settlement analyses will be performed with a combination of software, such as Primary Consolidation, Secondary Compression, and Desiccation of Dredged Fill (PSDDF) developed by USACE, FoSSA and GET’s own in-house settlement software.  Evaluations will be performed to estimate the ultimate settlement and time rate of settlement within the wetland creation areas.  This will aid in determining the amount of settlement that will occur with each dredging cycle and optimizing the capacity of the creation area.  The design should account for self-weight consolidation of the materials, expected foundation soil consolidation during construction, and the time needed for settlement to occur.