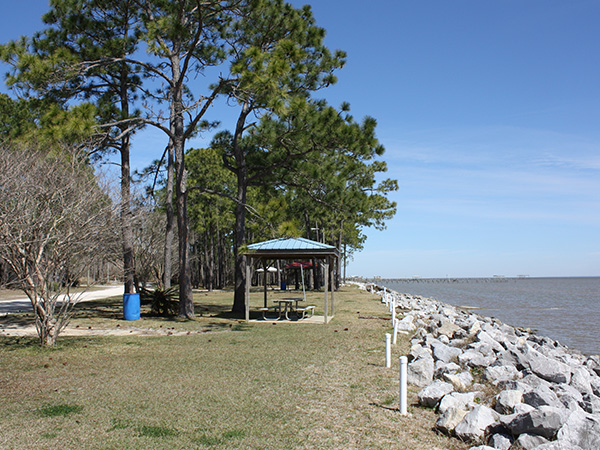 The soils explorations for the landside portion of the project included 12 exploratory soil test borings, and laboratory tests on selected soil samples. Based on loads provided by the project structural engineer and geotechnical findings, recommendations were made to support the observation shelter, shade shelters near the bay front, the boardwalk, elevated restroom structures and the beach access points (foot bridges) on deep foundations of various types and sizes. Recommendations were made to found the two shade structures positioned away from the bay on spread foundations.  Multiple pavement recommendations were given for all asphalt paved drives or similar type of surfaces that serpentine through the site.

A major portion of the rehabilitation and restoration of the existing park is a sandy pocket beach. The pocket beach extends approximately 1000 feet along the shoreline constrained on three sides and sheltered from wave energy by breakwaters. Groin structures bound the beach on the north and south sides each approximately 500 feet in length constructed of armor stone and tied to existing riprap that armors the existing shoreline. The sandy beach and the wave attenuation/groin structures have the added benefit of protecting the existing shoreline. The project includes importing approximately 20,000 cubic yards of off-site borrow materials to create the sandy beach.

The geotechnical study for the marine portion of the project included performing offshore soils explorations at various locations within the areas of proposed fill placement and breakwaters to evaluate the strength and materials of the insitu soil conditions. Additional investigations of nearby sandy soils were performed to evaluate the existing coastal sands and potential borrow samples to best match the existing conditions. Laboratory testing was performed on the soils collected from the area of the proposed breakwater to provide soil strength and consolidation information for the design of the breakwater. Engineering evaluations included performing settlement evaluations and bearing capacity analysis of the various types and sizes of breakwater designs being evaluated by the project design team. Underwater surface sediments were collected and analyses performed to provide the coastal designer with information to evaluate soil movements with various tidal, wave and storm conditions.