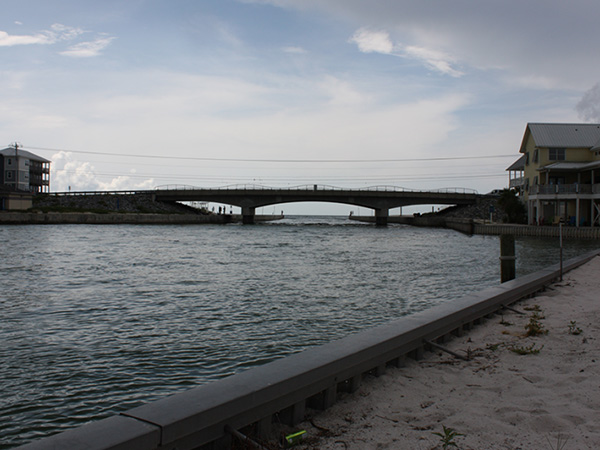 GET was responsible for the soils explorations and engineering evaluations for a seawall and bridge replacement on SR-182 over Little Lagoon Pass for the Alabama Department of Transportation (ALDOT).

The geotechnical investigations and studies were performed for all work associated with the bridge replacement and seawall.  The project included the removal of the existing 5 span bridge, 170 feet long by 28 feet wide and replaced with a 3-span bridge structure approximately 190 feet long by 44 feet wide.  The bridge bents were founded on 36-inch diameter spun-cast concrete cylinder piles.

To maintain traffic during construction, a temporary bridge and temporary retaining walls were constructed to the north of the existing bridge structure.  The new bridge and approaches were raised requiring approximately 2000 feet of roadway to be reconstructed.  The use of both mechanically stabilized earth retaining walls and traditional embankment fill slopes alternates were evaluated with respect to raising the bridge abutments and embankments.

Approximately 850 feet of seawall was replaced and the existing seawall was extended an additional 500 feet towards the gulf as part of the project.  GET provided the soil properties and design parameters to aid the project design engineer in the design of the seawall structure.

bridge replacement on SR-182 over Little Lagoon Pass for the Alabama Department of Transportation (ALDOT).