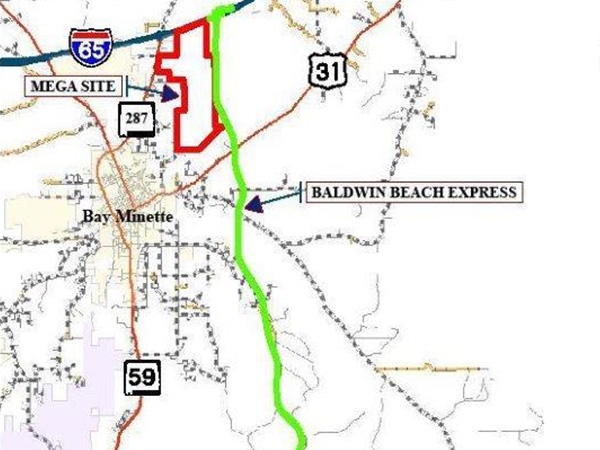 GET provided soils explorations and geotechnical engineering studies for over 15 miles of four-lane divided highway extending between Interstate-10 and Interstate-65 in Baldwin County.  The project also included the design of a new interchange at Interstate-65 which included an additional 14,500 linear feet of interstate ramps.  The project was divided into multiple parts requiring GET to work simultaneously with three different design consultants all working under a compressed schedule upon request of the client.

The project included performing 642 borings for a total of about 20,000 linear feet of soil borings.  The project required performing over 1000 soil classification tests, almost 200 triaxial shear tests and over 50 consolidation tests to evaluate the soil conditions.  Most of the 15 mile length of the project was performed within areas of dense timberlands and wetlands that required significant clearing and matting to access the boring locations without causing ground disturbance.

Soils explorations and geotechnical recommendations were provided for 14 bridges for a total of 9285 linear feet of bridge to be constructed over the various wetland areas, creeks, roads and railroad tracks.  Numerous sizes and types of pre-stressed precast concrete and steel H-pile were evaluated to provide alternate options for supporting each of the bridge structures.  Recommendations were also provided for five mechanically stabilized earth retaining walls for a total of about 1800 linear feet of retaining walls that were planned for this project.

Foundation investigations were performed for the required extension of two bridge culverts and one single barrel culvert that extend beneath I-65.