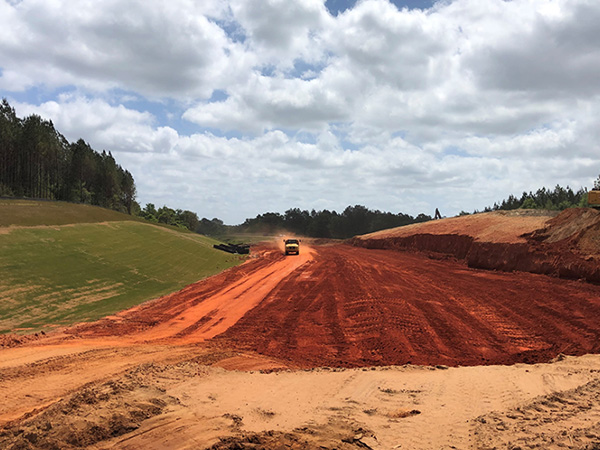 GET began this project in 2006 by providing soils explorations and geotechnical engineering studies for the Alabama Department of Transportation (ALDOT) for three pairs of dual bridges along the project limits. Between 2008 and 2019, numerous modifications and redesigns were performed along the 4.5 miles of 4-lane divided highway from near CR 576 to the Schillinger Road Extension. These redesigns were required to minimize the environmental impacts within the Big Creek Lake Watershed and to manage the overall project costs. The project was divided into numerous phases for construction purposes. For the various project phases, GET worked with three different roadway design consultants, two different bridge design consultants and the Design Bureaus of ALDOT to complete this project. The overall project included performing 545 borings for a total of about 25,000 linear feet of soil borings. The project required performing over 1300 soil classification tests, almost 150 triaxial shear tests and over 50 consolidation tests to evaluate the soil conditions.

Soils survey, materials and slope study reports were provided for the roadways and embankments along the corridor. As part of these evaluations, a life cycle cost analyses was performed to evaluate the initial and long-term costs of flexible and rigid pavements. Designs were also provided to mitigate the areas of high ground water and/or poor soil conditions.

Soils explorations and geotechnical recommendations were provided for 14 bridges to be constructed over multiple wetland areas, creeks, and roadways. Numerous sizes and types of prestressed precast concrete, steel H-pile, drilled shaft and spun cast pile foundations were evaluated to provide alternate options for supporting the bridge structures.  In the areas of some of the bridge embankments, recommendations were provided for wick drain installation and/or embankment surcharge to minimize long-term settlement of the embankments.

Soils explorations and geotechnical recommendations were provided for fifteen mechanically stabilized earth retaining walls for a total of about 6200 linear feet of retaining walls that were planned for this project as part of the various project design alternates. The wall heights ranged between 10 feet and 40 feet in height. The walls were planned to reduce bridge lengths, reduce impacts to adjacent creeks and to stay within the right-of-way limits adjacent a cemetery.

GET also provided engineering support services during construction under its Construction Engineering Inspection contract with ALDOT.